All Collections
Contacts
How to use the Nth selection tool

How to use the Nth selection tool

This tool lets you quickly and easily break up an existing list or segment.

Written by Support Team
Updated over a week ago

The Nth Selection tool generates a specified number of lists. Each one containing an equal number of randomly distributed contacts. This is very useful if you have a very big list that you want to divide into equal smaller parts. Sending a campaign to a large audience all at once is not always the best option. Sometimes it's better to divide your such campaign into smaller chunks and the Nth selection tool comes to the rescue here.

First, navigate to the Contacts>Lists screen

Select the options for any existing static list or segment and choose "Nth Selection lists".

Give the lists series a name and specify the number of lists to be generated. 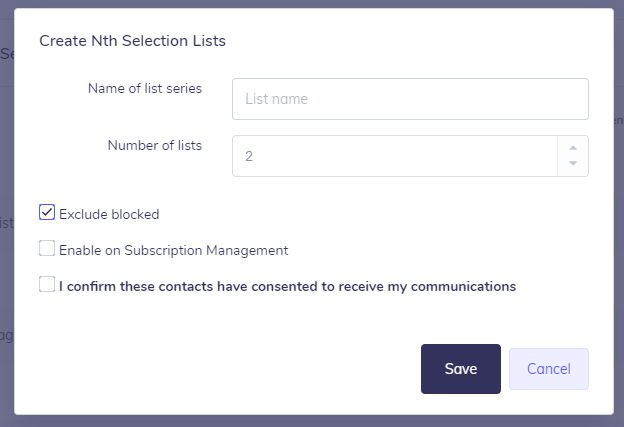 You can allow our system to skip blocked contacts when generating these new lists.

Brand new static lists are created. These are available on the Static Lists tab.

Did this answer your question?